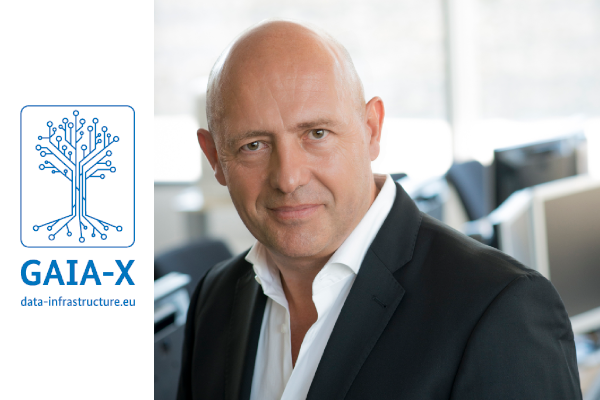 The European Commission's stated ambition is "to make the coming decade Europe's digital decade". This goal makes sense, as the amount of data being produced and used is exponentially multiplying, reaching more than 40 zettabytes. There are now more cloud-based data-points than stars in the observable universe. When it interacts with artificial intelligence, this data is a real innovation engine. However, for the full benefits to be generated, this must be via a secure, federated cloud ecosystem that meets the highest digital sovereignty standards. This is the objective of the GAIA-X project. Yves Reding, CEO of EBRC explains.

In every crisis there are opportunities, and the trick is to know how to seize them. Thus, the European Union has launched its "Next Generation EU" recovery plan featuring 750 billion euros of new funding. A large part of this will be targeted at digitalisation, and this will be the leap towards the digital Europe which has been envisioned for so long by the industry. Indeed, the pandemic has raised awareness about Europe’s dependence in this area. "Lockdown has seen the world shift from physical to digital, with the latter now having become vital. Unfortunately, digital Europe has not yet been built. Just as the Covid-19 crisis has revealed that Europe does not have sufficient autonomy in the key area of health, it has also highlighted lack of control in the digital sector. The Old Continent is now a second-tier global digital player. Fortunately, though, digital innovation comes in waves. We might have missed the first one, and now we need to ensure we don't miss the second with artificial intelligence at its core," warns Yves Reding. Whether it is safe autonomous vehicles, financial risk assessment or more reliable medical diagnosis, artificial intelligence is set to revolutionise many sectors.

A question of values

In her latest State of the Union address, the Commission president warned that "Europe must lead the way in the digital field, otherwise it will be forced to align itself with other players who will set these standards for us". The Franco-German engine has started to power the way with the GAIA-X project launched in November 2019. "This initiative, born in Germany, has the ambition of building European data infrastructure based on values such as transparency, portability, trust and sovereignty. Our digital world is currently in the hands of large organisations that are in effect black boxes. They are players and referees at the same time, and can change the rules of the game to their advantage and treat data as commodities. This generates, among other things, serious distortions in terms of free competition, innovation and the respect for personal data, and we, Europeans, find this unacceptable. GAIA-X's ambition is not about building new cloud giants. It seeks to bring players together in this ecosystem to ensure they respect certain rules of conduct, and to return control of digital governance to European authorities and other stakeholders, while respecting European values," explains Yves Reding.

Founded as an AISBL (Association Internationale Sans But Lucratif), the initiative has been open to all since September 2020. Already, the giants of the digital industry have signed up, whether they are American (Microsoft, Oracle, Amazon or Google) or Chinese (Alibaba or Huawei). This expansion has raised some objections but, according to Yves Reding, does not invalidate the project in any way. "The important thing is to have governance at European level and to involve every player, because the values being advocated are ultimately universal. What could be more natural than to promote transparency, openness, trust, sovereignty and portability? It is in everyone's interest that as many players as possible follow these principles. However, the AISBL statutes state that only those members considered to be European companies have decision-making power.

Benefits for all sectors

GAIA-X is also more than just cloud infrastructure. Above all, the initiative seeks to develop multiple use-cases featuring artificial intelligence. In this respect, the project operates on a top-down approach at a European level. Brussels-based AISBL GAIA-X provides project governance, and currently has more than 200 members who cover all digital socio-economic use cases, or so-called "data spaces". GAIA-X is also a bottom up project featuring regional GAIA-X hubs. "The construction of the Luxembourg hub is underway. It will identify the use-cases that are strategically important for the country (e.g. finance, energy, health, industry 4.0, mobility...) and then will bring them to the European level. In October 2020, as a "Day-One member" of the AISBL, EBRC took the lead and helped to form a new cross-border alliance in the field of space-industry data, with the RHEA Group, CS Group and 3DS OUTSCALE. This consortium has been a real success, and has since been joined by major players in the field such as Airbus, Thales Alenia Space, Capgemini, Safran as well as ESA. The result is the creation of a new "Space" data sector. In the different thematic groups, GAIA-X members will develop exchange and security standards specific to their area of expertise. It is therefore an extremely complex and ambitious European project, not in the least because digital technology affects every aspect of life. It will bring real added value to the European citizen," says Yves Reding.

Putting Luxembourg on the map

Officially launched in June 2020, the GAIA-X initiative was initially a Franco-German project involving some 22 members. Now more than 200 organisations have seen the value of joining. As soon as membership was opened to other countries, EBRC signed up to become a "Day-One member" to represent our entire group. "It has been ten years since EBRC launched its Trusted Cloud Europe initiative, with us promoting the need for high European standards based on principles of European sovereignty. Sometimes it felt like this message was going unheard, but now the GAIA-X initiative gives us the opportunity to raise awareness within the Luxembourg ecosystem, using our strong local connections. For example, we participated in the 12 October 2020 conference on this topic organised by Cloud Community Europe-Luxembourg, ICT Luxembourg and FEDIL. A second event will be held on this subject by three associations on March 25. It will feature as keynote speakers Hubert Tardieu, Chairman of the Board of Directors of GAIA-X, as well as the heads of the German and French Hubs. Mr Tardieu will highlight the use-cases being developed in Germany in the field of IoT and mobility, with the other speakers describing the projects supported by GAIA-X in the energy and finance sectors," Yves Reding announced.

Although the project is still in its infancy, it is clear that it is developing at full speed. This is proof (if it were needed) of the importance of the issues raised.